Batting a .300 and thoughts on being Perfect

Batting a .300 and thoughts on being Perfect

Fall means a lot of things: temperature changes, beautiful colors on the trees, apple and pumpkin picking, and my personal favorite: baseball playoffs!

As I have been watching the games this playoff season, I have been struck time and time again at how the professional baseball players, the best of the best players in the country, have batting averages of around .300.  That means that 30% of the time they are successful at making contact with the ball and making it to at least first base. Batting .300 is no small victory, and the crowds cheer for this amount of success!

Thirty percent success rate.  That means the other 70% of the time, the player does not make it to base, and instead makes his way back to the dugout. That is a huge margin of error!

We all know people who we would label “perfectionist,” and in fact most people have the tendency toward it. Our culture feeds our desire and deep inside we tend to believe perfection is possible. Perfect appearance, perfect thoughts, perfect achievements and a perfect household elude us in this life, yet the pressure remains to seek them anyway.  The pressure literally comes at us from everywhere.

Yet in America’s favorite pastime, the goal is to have success 30% of the time.  No player is expected a 100% batting average, because they are up against a professional pitcher!  The reality is that the expectation of 30% is good enough batting.

Dr. Richard Winter wrote a book called Perfecting Ourselves To Death.  Winter describes the importance of knowing yourself in order to grow. “When someone begins loosening the grip of unhealthy perfectionism they must have a strong and reliable sense of identity and purpose, built on a foundation of reality and truth, that will allow them to grow toward a healthy pursuit of excellence” (p. 147).

As we consider a healthy pursuit of excellence, we should take a lesson from the baseball greats.  We are not going to be perfect.  We are going to mess up.  What if we aim for batting a .300 in our lives?

To judge is to form an opinion, or to form an estimate or evaluation.  When I hear “don’t judge” in the way it seems to be most often used -particularly social media-  I think about how impossible it seems.  We judge things all the time.  We all instinctively form opinions about everything from food to cars to people.  We can’t avoid having opinions. 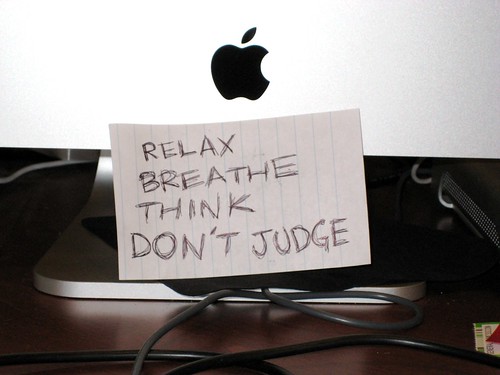 I think the intent of the “Don’t Judge” maelstrom is mostly well-intended.  I think a better word for what people are trying to say would be “Don’t Condemn”.  It seems that nobody reacts negatively when I judge someone to be pretty or smart or competent.  It is when I move from judging to expressing contempt for others that I have crossed a line.

My opinion about the relative appearance of a person is powerless in and of itself.  When I state that a person is ugly in appearance, I am revealing my perception about that person.  I am not stating a fact.  Another person could find the same person attractive.  Neither the positive nor the negative opinion a) alters the actual appearance of the person in question, or b) measures the worth of the person in question.

What is more, asking me not to state my opinion or to change my opinion is to devalue me.  It means that my thoughts and feelings don’t matter or shouldn’t exist if they disagree with yours or make you uncomfortable.  I don’t have to call you handsome if I think you look like a troll, nor does the fact that I think you look like a troll make you in fact, a troll.  It does not even mean that you are actually, objectively, “ugly”.  I am not bullying or being contemptuous when I state my opinion.

My opinion becomes contempt when I attempt to declare the worth of a person or thing.  If I look at the person I deem unattractive and proceed to tell them, “Your mother should have aborted you,” I am expressing contempt.  When I say “You should wear a bag over your head so the ‘rest of us’ don’t have to look at you,” I am expressing contempt.  I am declaring what you are worth (an objective reality) on the basis of my subjective perception.  I express contempt for your being, which I have assessed on the basis of your appearance exclusively.

The vast futility of contempt is that it absolutely cannot do what it is trying to do: change the actual innate value of the thing (or person).

Having an opinion does not make me a jerk.  It’s how I express that opinion that matters.  I can hold it for my own self and leave others to make their own assessments, or I can condemn the object of my opinion as worthless.  Either way, how I express my opinion says more about me than it does about who or what I am describing.  –Jonathan E. Hart, LPC