I have a Dieffenbachia.  It’s a tropical houseplant I’ve been growing for a few years now.  When I got it, it only had 4 leaves and stood maybe a foot high.  I stopped counting the leaves a long time ago.  It now stands three to four feet high.  Maybe I should say “stood”.  I have recently learned a great deal about the plant’s nature and needs, which resulted in my cutting it almost in half.  Let me explain.

The Dieffenbachia is also known as “Dumb Cane”, apparently because of it’s poisonous sap, which will cause throat constriction and even death if ingested.  “You’re dumb if you eat this cane”, I think is what the name means.  I, personally, call it “dumb” because it will grow itself into oblivion.  If you let it go, it becomes too tall for the root system to hold upright and it falls over, uprooting itself.  In order to properly care for the plant, one must cut off a fairly significant amount of growth.  New, healthier, growth sprouts from below the cut, and the plant is sturdier and more balanced.

I must confess, pruning seems counter-intuitive.  It feels destructive to me to chop off parts of the plant that are doing well, from which new growth is continually sprouting.  It seems wasteful to simply drop those leaves and stems into the trash.  (I actually planted the severed portion to see if it will take root and propagate.  I’ll let you know what happens, maybe.)  Yet the overall health and continued success of the plant depends on this process of cutting back. 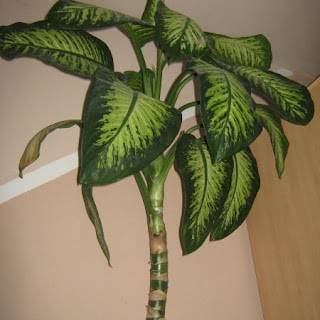 Why the horticulture lesson?  Because this seems to be a beautiful, if unsettling, analogy for the human condition.  We are all about growth.  We love to get stronger, taller, to spread more leaves and challenge new heights.  Growth is good.

We don’t seem to like the idea of pruning much, though.  First, it means experiencing pain, and nobody likes pain.  I’m sure my plant was terrified as I approached with my knife.  Second, it means understanding that not all growth is necessarily good.  There is a kind of growth inherent in humanity that turns into pride, an appearance of strength that leads to catastrophe.  I love to see new sprouts on my plant, but I was utterly dismayed when I returned home one day to find that the plant had toppled over onto its neighbor, damaging both plants in the process.

The moment we believe we have overcome a temptation, that we have succeeded in surpassing the weakness that used to trip us up, we have entered a kind of denial that we often label as growth.  “I’m better now.  I wouldn’t do that! It’s no longer a problem for me.”  Pride is the language of “I’m better than that”.

I celebrate when I see anyone overcome a temptation or weakness, but I also cringe just a little, because I fear that in the certainty of having surpassed the actual behavior or attitude, they may come to deny that the core weakness to it still exists.  It is the core weakness that will topple us, for in the moment we believe we are proof against it because we have “come so far”, we let down our guard and open ourselves up to it all over again.  None of us is as strong as we think we are.

Wise is the one who will open him- or herself to pruning when it comes, who will humbly acknowledge the truth that their heart whispers to them and reveal it to a trustworthy helper.  It hurts, it’s scary, it changes things irrevocably… and it spurs new, real, balanced growth.  Those who resist pruning head for a far more painful tumble when the overwhelming weight of “growth” tumbles them from their pot.  The damage is greater, the recovery longer, the hurt done to self and others deeper.  The very hurt we fear from the pruning is intensified and broadened.

Not all growth is real or healthy.  Often it becomes an illusion of strength or competence, while on the inside we deny the toppling sensation we feel deep down.  Better to bring it out voluntarily and deal with it sooner -to submit to the pruning knife –  than to let it continue until we fall.